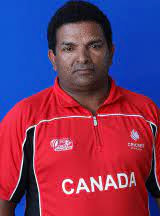 Pubudu Dassanayake, who as coach guided Canada to the 2011 World Cup, and then went on to stints as head coach of Nepal and USA, returned to the Canadian set up this summer. Expectations are high that under his stewardship, Canada can find its way out of the cricketing wilderness.

In an exclusive interview for Canada Cricket Online, Dassanayake talked about his time away, what needs to change with Canada’s national cricket team, and the effort it will take to turn things around.

Faraz Sarwat: After coaching Canada from 2007-2011, how did you find the experience of coaching Nepal and USA?

Pubudu Dassanayake: It was challenging everywhere, but maybe for different reasons. I had learned a lot as coach for Canada, particularly how to handle different groups of people and how to play as a unit in a national team environment.

When I took over the USA team, they were all over the place. The ICC had suspended them and they were in the process of making a new constitution and getting a new board. But the ICC was keen on them and wanting to move them forward.

The cricket community in the US wasn’t together. On the field, the players from different backgrounds wanted to play their own way. The different communities weren’t on the same page. So building a team culture became important. Some players left when rules were put in place and things got tough.  But later when they saw that it was working, the senior players all came back, bought into the system and changed. I feel I left them as one unit and they were playing as a team.

Training with the US team wasn’t easy. There were some of the same issues as with Canada, but worse. Four guys would be in California, four in New York, others in Houston. It could be difficult to get everyone together.

None of that was an issue with Nepal. The players were available 24 hours a day and were ready to go. They were a young team, very talented but were under-performing. They played as a unit. They were hungry to win. They wanted to move up in the ICC rankings, and I just pushed them in the right direction.

The issue at the time I first went there was that there weren’t a lot of senior players. They didn’t have a path and they lacked confidence to play at the highest level. But we were able to pull it together, because team culture and playing as a team was never an issue. They worked hard. It was actually a relief to go there (again) after the USA.

FS: When you were the coach of Nepal, you saw Canada at ICC World Cup Qualifiers. What were you noticing about your former team?

PD:  I think back to the 2009 World Cup Qualifier (when I was with Canada) and what a tough tournament that was. Credit to Cricket Canada at that time, who sent us to Sri Lanka for 6 weeks to train. It made a huge difference to our fitness and match readiness. Now when I was looking at Canada, it was clear that the hard-work part was missing.

The 2009 Qualifier was very tough and no one had really expected us to qualify. The players in that team worked very hard. But people didn’t see or understand the work that went into that qualifier. So when the 2014 World Cup qualifier came around, I felt that Canada took it very casually. They thought they’d run through the other teams and that wasn’t the case.

With Nepal I was training with the team every day for two months before the tournament. Canada were confident they would do well, but in the back of my mind I knew it would be a miracle to come into a tournament like this from winter, and having just done indoor practices. And one month before that qualifier, the coach was sacked and half the team was changed.

FS: It was a puzzling move. I talked to people at Cricket Canada at the time and they thought this was  necessary to bring in new energy.

PD: That was a tough thing to do before the qualifier. Canada was all over the place at the tournament.

(In contrast) at the 2009 Qualifier every player worked hard, even the names you don’t see high on the performance list – all  contributed, fielded really well, accepted the team plans and executed them.  In those six weeks of training in Sri Lanka, every player probably lost a good 10-15 lbs. That kind of work and dedication, I don’t see it even now with Canada’s players. They think things can be achieved just like that at this level, and that will never happen.

FS: There are World Cup qualifiers on the horizon again. Is it a challenge to make the board understand what is required of a team to be successful at these tournaments?

PD: The board is supportive of me. What I’ve asked for, I’m getting. I wasn’t here during those earlier qualifiers so I don’t know what happened. But it seems like there weren’t any plans because there wasn’t a permanent coach. But now I was able to come up with plans that are accepted and we’re going in the right direction. But it will take a little bit of time to get moving. The responsibility lies with the coaching staff to put plans together and then have the board do it.

FS: What’s your primary goal for the team?

PD: In April we have to get back to ODI status. If you do that, then in an 18-month period you can play 36-40 matches or so, which is full time cricket and you have to contract players. That automatically puts your cricket into the next level.

In Malaysia (at the CWC Challenge League in December) we will do well for sure. The other teams are behind us. I don’t see any issues there. But in April, we’ll be playing the ODI teams in the Associate circle. Teams like UAE, USA, Namibia, Nepal. Every team is talented at that level.

By August/September next year, we need to get into the T20 World Cup, which Canada has never done. And I think this is achievable. We’re more of a T20 team than an ODI team, so I think we have a good chance.

FS: It’s clear that a number of Associate teams have leapfrogged over Canada in recent years. How do you assess the current available talent?

PD:  The talent is there, but we’ve missed the hard-working part. I need to build that culture again. My assessment is that we’re way behind on fitness. 60-70% of my effort over the next 2-3 weeks will be focusing on fitness. The skill levels are good enough for this tournament in Malaysia, but after that, we’ll need to keep pushing.

FS: What about some of the newer players you’re expecting good things from?

PD: Among newer players, Pargath Singh and Aaron Johnson from BC are former List A players, and they are high quality. We’re looking at 50-overs cricket, so we need players who can stay at the crease and bat long.

I’m impressed by Harsh Thaker. Every time I see him, he’s improving. Shreyas Movva and Armaan Kapoor, are both good batters and capable wicket keepers. They’re young and have a lot of years to play. There’s a lot of talent in the country. The fast-bowling is a little thin, but Kaleem Sana coming back is good for us. I’d say we have the best guys in the system.

FS: Canada has also lost good players who for various reasons fell out of the system. Are you going to try to bring some of them back?

PD:  The major thing is to find a way to bring Nitish Kumar back. He’s one of the best in Associate cricket even now. He’s not available this year, but there’s a chance he could be available in April. It would be a good boost for the Canadian team if we could bring him back. Srimantha Wijeyeratne retired a year ago, but we convinced him to come back for at least a year to help us get back to ODI status.

FS: What do you make of the Canadian cricket system now compared to when you were last here?

PD: I’m sure there are a lot of changes. But I need to look at things that are in my control. We can always blame the board for a lot of things, but we also need to change the attitude of the playing group towards the team and towards international cricket. When you earn a place in the team then you know what it means. But if it’s just given to you, you don’t know the value of it. Hard working culture. Team first culture. Having pride in representing Canada – all of the things I feel we have lost from that era when I was involved. I’m really going to work hard to bring it back. I’ve always believed that when a team is winning on the field, the rest of things do fall into place.

Faraz Sarwat is Canada’s foremost cricket writer, with bylines in the Toronto Star, the Wisden Cricketers’ Almanack, ESPN Cricinfo and numerous other publications.