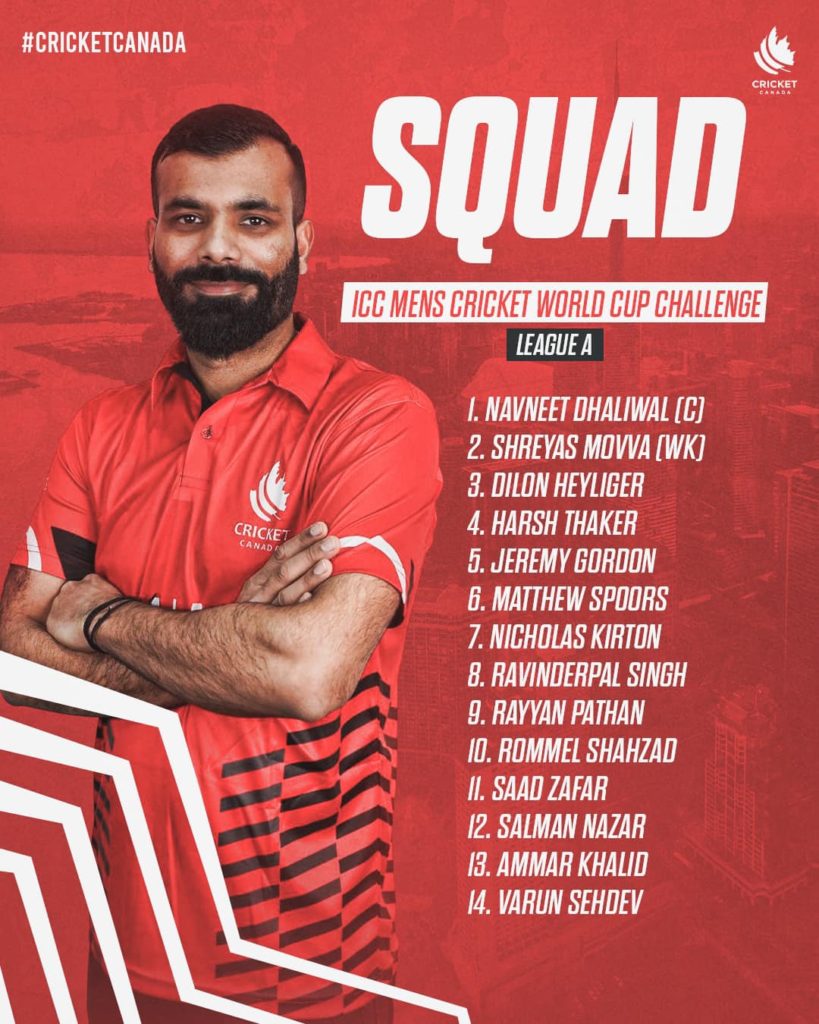 Toronto, Tuesday, 26 July 2022: Today, Cricket Canada posted the names of the fourteen players in Canada’s official squad for the ICC World Challenge League A that starts on starts on Wednesday (27 July 2022). The opening game of the tournament sees Canada play Denmark at Maple Leaf Cricket Club, King City, Ontario. This 50-overs a side game has a scheduled start of 9am and all matches in the tournament have List A status. The also game marks the return of Pubudu Dassanayake as Canada’s national coach.

The tournament is the second in a series of three where each of the six participating nations plays each other once in 50-over matches that have List A status. The first series took place in Malaysia in September 2019 and the third series is due to be played in Malaysia in December 2022. The top team af the end of the third series of matches will advance to a World Cup Qualifying competition in 2023 before the World Cup takes place in India.

Denmark at the July 2022 Challenge League A

An extended Danish squad has been listed on the ICC website. Potentially some of the players will travel to the Toronto area as reserves just in case of any injuries or any fallout on the COVID-19 trail that may result in a player or two having to isolate and miss the action.

Denmark has been quite active in T20I cricket in Europe, so various players have been active, which always helps in ICC tournaments where the north/south divide can play a significant part in tournaments operating on a global basis. Venturing from a wintry minus 20C or minus 25C to plus 25C for an event can certainly be a big test that may not be overcome by 3-4 days of preparations in a host country

The extended Danish squad includes some veterans as well as several youngsters. Veteran wicket-keeper batsman Freddie Klokker played in the 2001 ICC Trophy in the Greater Toronto Area. He gained experience with the MCC groundstaff, played some games for Warwickshire before moving to Derbyshire where he scored two first-class centuries.

Amjad Khan made his senior debut for Denmark as a 17-year old and went on to gain experience with Kent and Sussex. He played on test match for England at Port-of-Spain, Trinidad. He took the wicket of Ramnaresh Sawwan in the West Indies first innings and ended with figures of 1/111. He also made one T20 international appearance for England, but his progress was struck by injury and a number of other emerging English pace bowlers. Amjad Khan has recently played in 8 T20Is for Denmark.

Denmark at the September 2019 Challenge League A

On the bowling front, right-arm medium Jino Jojo took 10 wickets for 238 runs with a best of 4/29. Left-arm medium pacer Oliver Hald took 7/199 with a best performance of 2/30. Slow left arm spinner Nicolaj Lægsgaard picked up 6 wickets for 130 with a best of 2/26. Off-spinner Hamid Shah took 3/99, with all three wickets coming in the same game at a cost of 37 runs.

Seemingly missing from the Danish squad for this second series of matches is Delwar Khan who took 3/149 with a best of 3/15 in the opening series in Malaysia.

Note: The players names are based on the squad listing on the ICC Website as of 24, July 2022.